We've had a theory here at Spendabit, and with circumstantial evidence to support it, that people tend to spend fewer bitcoins when the Bitcoin price is down. But just last week, Adafruit (one of hundreds of Bitcoin-accepting merchants listed on Spendabit) put out a short blog-post featuring a chart giving further credence to our thesis, showing Adafruit's Bitcoin-based sales have gone down substantially over the past year, right alongside the market price for obtaining a bitcoin.

This probably doesn't come as a surprise to most Bitcoin enthusiasts — many of whom are ardent believers in sound, “deflationary” money as a matter of principle — but it must leave believers in the branch of voodoo economic thought known as Keynesian Economics scratching their heads (or, more likely, making excuses).

Most readers steeped in the ways of Bitcoin probably need no introduction to Keynesian Economics, a branch of economic thought that owes both its name and core tenets to the early 20th-century economist John Maynard Keynes. But in hopes we're not just preaching to the choir we'll give a little background... 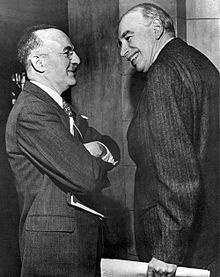 Keynes is the taller, lanky fella on the right.

Economics, perhaps more than any other branch of science, is one where the opinions and theories of its practitioners vary wildly. On one end of the spectrum you can have an economist touting the virtues of printing money to ‘stimulate’ an economy, and at the other end you'll find an economist attacking the very-same practice as thoroughly destructive; one economist scolds budget deficits, another embraces them.

Why this divergence in thinking exists is an interesting question (it probably has a lot to do with the fact that controlled experiments are virtually impossible in the realm of economies), but regardless, the great difference in opinion has led to the profession having a number of, what are usually referred to as, “schools of thought”. And though the proponents of these various ‘schools’ may agree on some of the most basic principles of economic science, they tend to disagree on the questions most relevant to the world we find ourselves living in.

One of the most characteristic qualities of a Keynesian economist is his fear of “deflation”. What deflation actually means is a sticky subject, but what most Keynesians (and that would include most of the world's central bankers) mean when they evoke this boogie-man is the phenomenon of falling prices. Or, put another way, they fear the value of money increasing.

The theory is basically as follows: If the general price-level of goods and services is falling, this will lead people to withhold purchases as they anticipate even lower prices — which in turn leads to further price declines... continuing in an infinite loop until the universe explodes (or a gracious central-banker steps in and prints a bunch of money).

I kid, I kid. But there actually are ‘economists’ out there saying things like, “deflation may pass the point of no return” with a straight face!

Others have debunked the deflation goblin before, whether via historical data or by pure theory, but what evidence could be more clear than the experience of Bitcoin and the distributed economy that surrounds it — we're living it!

We've been through at least three major “deflations” in Bitcoin-land so far: in mid-2011 (when the price ran from around $1 to $30), in early-to-mid-2013 (from under $20 to well over $200), and most recently in late 2013 (from around $100 to over $1,000). None of this is any guarantee of Bitcoin's continued success, but so far, the currency has not been destroyed; people are still spending bitcoins (though fewer, given the recent price decline); and even the universe seems to be firmly in place.

Perhaps inflation is not a necessity for life on Earth after all.