Last week someone on Reddit was having trouble grasping the virtues of Bitcoin versus good-old credit cards. He listed a number of perceived pros for Bitcoin, but also what he saw as its cons — summarized here:

He concludes, “In the end I don't get all the hype. Why would i resign from simple credit card?”

The first thing I noticed was, of the four ‘cons’ mentioned, three were weak spots (real or perceived) in the Bitcoin ecosystem, not with Bitcoin itself. In other words, almost all of the ‘problems’ the Original Poster (OP) pointed to are due to Bitcoin's young age. That is, because it's still young, its “infrastructure” and knowledge amongst the public are not as developed as the services, tools, and awareness surrounding credit cards.

In each of these cases, the problems will be and are being solved.

Now, to give the benefit of the doubt to our fellow redditor, he had at least one legitimate gripe (no chargebacks); and, we shouldn't expect those not steeped in crypto-currency to read the fuzzy line between Bitcoin, itself, and its surrounding infrastructure. But courtesy aside, there's an important angle that few on Reddit seemed to point out: the OP was asking the wrong question.

Bitcoin has two central ‘features’ that go hand-in-hand. Without either of these, Bitcoin would not be possible:

If you're only focused on the payment network, you're arguably missing Bitcoin's most important feature: Bitcoin is honest money — Bitcoin is a currency, an “implementation of money”, in its own right. Credit cards, on the other hand, are simply gateways for transferring other forms of money (other currencies). 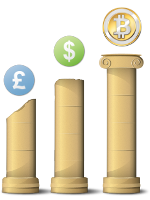 But more to the point, when you use a credit card, you're really using a national currency under the surface, and all those currencies are raught with corruption. Dollars, pounds, euros, and yen are all virtually guaranteed to buy you fewer goods next year than they do this year.

Bitcoin's ‘currency unit’, in tandem with its transfer-ability are the source of “all the hype” — whether the ‘hypers’ realize that or not.

This subtle fact — inflation — may not seem that important, but over the course of years and decades, the integrity of a monetary unit makes the difference between poor countries and rich ones, to speak nothing of the individual hardships people endure.

Today, all the buzz around Bitcoin is related to its being a phenominally easy way to send money around the world. In the fullness of time, people will see there's much more to it than that.

They'll come for the payment network, but they'll stay for the money.